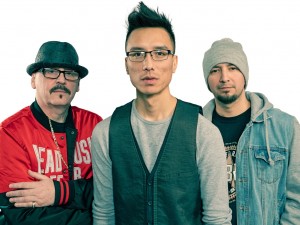 The new single by Low Budget Rock Star, “More Than Ever,” sounds like it’s about a lover: “I need you more than ever / baby don’t you ever go.” But that chorus was written about drummer Richie Cudmore, who was diagnosed with cancer in 2022. It was written as a “what if,” scenario: How would the Indigenous three-piece rock band survive without Richie? Would the remaining two members of the anthemic trio, from the remote northern community of The Pas, Manitoba, find themselves thrust into the unknown, wandering the streets of Winnipeg, feeling lost, tired and alone?

Sadly, that wasn’t a hypothetical scenario. Richie Cudmore died in July 2022, at the age of 58 — just before his band was ready to release the single about him. Cudmore wasn’t just the band’s drummer: he was a co-songwriter and a self-proclaimed 21st-century artistic poetic prophet, whose experience and expertise helped foster Low Budget Rock Star’s rise since their debut release in 2019, a rousing eponymous and autobiographical single about their humble beginnings.

The beautifully crafted lyric video for “More Than Ever” is now streaming. In it, singer/guitarist Kennie Henderson is metaphorically searching for answers in the anguish. But with courage and faith in the higher power, the band slowly dig their way out of a dark place by realizing that life is a gift—and their journey from grief to joy is shown via the song’s lyrics and imagery in the video.

Music has been a salvation for Henderson and bassist Harley Whitehead since the beginning. “Growing up on the reservation,” says Henderson, “I used music as an outlet to help overcome the struggles of poverty, alcoholism, drug abuse, and domestic family violence.”

The surviving members of Low Budget Rock Star are soldiering on, celebrating Richie Cudmore’s legacy and the fact that life is a gift — now, “More Than Ever.”